The Father of Dub - King Tubby

The Father of Dub - King Tubby 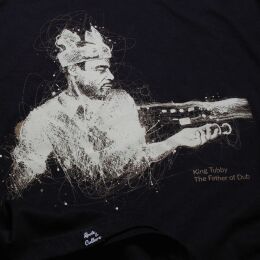 The echoes, reverbs, delays, the first dub remixes and productions of Osbourne Ruddock (because that was the name of King Tubby) are so characteristic that they cannot be mistaken for anything else. Tubby, without a doubt, was an outstanding sound engineer, a precursor of innovative recordings, thanks to which not only Reggae, but the entire music market took a new form, and Dub became an art form and a separate music genre.

The King Tubbie t-shirt graphic as  an original illustration, an artistic pencil sketch, made of handwritten spontaneously scribbles [sic!].