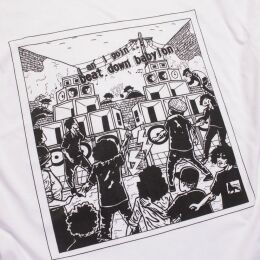 Junior Byles wrote the great roots track "Beat Down Babylon" against Babylonian oppression and corruption. However, the number quickly became a symbol against police violence, of which there was so much at the time. Dennis Bovell (Reggae producer, guitarist) play this protest song during a cop raid on a Sound System session in London, for which he ended in jail for a year ...

The graphics on the t-shirts are kept in a comic style, and the scene presented on it is quite different from the above one, so let's stick to that.